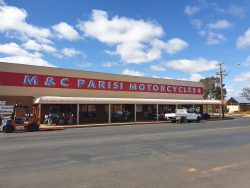 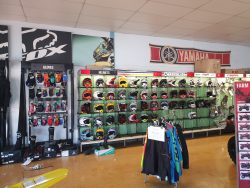 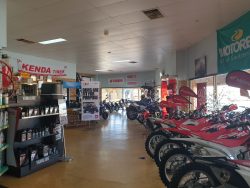 M and C Parisi Motorcycles have been providing great service to the people of the Outback since 1975.

The Cobar-based business serves an area from Queensland to South Australia and Western NSW. They have even sold to a client in Tasmania!

“We have clients all over,” business co-owner Mario Parisi said. “Broken Hill, Tibooburra, Dubbo, from Cunnamulla to Hungerford. You’ve got to have good service.”

The business had its beginnings when Mario was offered the Kawasaki and Suzuki franchise in Cobar. He had already done his mechanical apprenticeship with the local Volkswagen/Toyota/International dealership and had just returned from a six-month trip to his home country of Italy after a stint as a fitter with the Australian Gas Pipeline. He decided that running the franchise would be a good opportunity. In the meantime, Mario’s younger brother Claud had finished his apprenticeship with the same Cobar dealer and had relocated to Melbourne to start work with Detroit Diesel. Mario contacted him to propose the partnership and M & C Parisi Motorcycles was born.

“It was originally owned by Oscar Betts who had a push bike shop,” Mr Parisi said.

The brothers’ original plan was to run the business as a workshop repairing and servicing motor vehicles.

At the time, the workspace was too small for cars so they opened a motorcycle business instead. Both men are motorbike enthusiasts so it was a good fit for them.

“Originally, we were going to do cars. But you could only fit one car in the shed.

As we got into the bikes, the bikes overtook the cars.”

From that point onwards, the business went ahead in leaps and bounds, and the name M & C Parisi Motorcycles is now synonymous with sales, service and repairs across the western region. Claud takes care of sales while Mario takes care of service. They also employ other staff to assist with other aspects of the business and Mr Parisi’s son Joel helps on his days off from his role in mining.

“We were selling Yamahas and Suzukis and Kawasaki for 20 years,” Mr Parisi said.

The Kawasaki franchise was discontinued and the team took on the Honda franchise after being approached by Honda Australia. Their business is now a modern showroom and workshop covering some 678 square metres.

“It’s really expanded,” Mr Parisi explained. “The business is double the size now and we have completely filled the block we are on.”

Mr Parisi attributes their success to being dedicated to client needs.

“Providing services and being there basically since 1975,” he said.

“Our success in business has been talking to people and providing a service through sales and back-up.”

Mr Parisi said they are also committed to being there when times are tough for clients.

“We have to support people in the bad times too. Usually during the bad times, you don’t see people so that is the main time to help.”

“In agriculture, in particular, having a four-wheeler motorbike, that’s their main work tool.”

“We go to outback field days. We were involved in the Nyngan Ag Expo when there were only four exhibitors. Things have changed in terms of people looking for sales. We are very proud that we have been there for people.”

For those who want to put in the effort, Mr Parisi said there is work available and that the Outback is big enough for other businesses.

Mr Parisi said that going into business is tougher these days, and he is appreciative to have had a long and rewarding career.

Twice rewarded for their efforts by being named MTAA Motorcycle Dealer of the Year, the Parisi brothers have also featured in news stories in the local media.